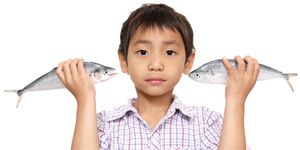 Nutrition: Omega3s are the fat that’s good for your family

Parents know that high-fat diets are not recommended for children, but there’s one fat that has been steadily making its way onto must-have nutrient lists, especially for growing bodies: omega-3 fats.

There are two types of omega-3 fatty acids that you may recognize by their acronyms: DHA (docosahexaenoic acid) and EPA (eicosapentaenoic). Research is showing that these omega-3s may offer a growing list of benefits that start during pregnancy.

These fats are essential for healthy neurological development of the fetus. Scientists have linked mom’s intake during pregnancy and breastfeeding of the omega-3 fats found in seafood, particularly DHA, to differences in various attention and intelligence tests during infancy and childhood. Higher DHA levels in moms have been linked to a child’s quicker processing of information in the brain, prolonged attention and higher intelligence scores.

Other research has backed up a connection between low intake of omega-3s and Attention Deficit Hyperactivity Disorder (ADHD) as well as behavioural problems. A recent Oxford University study of British children ages seven to nine, found that those who had the lowest levels of DHA in their blood had the most difficulty in their ability to concentrate and learn.

Eating fish is by far, the easiest way to get omega-3s into your family’s diet. Cold water fish such as salmon, herring, sardines, mackerel and tuna are particularly rich sources of DHA and EPA.

All the revelations about the importance of omega-3 fats on brain development has led to an increase in omega-3s being added to foods, such as some yogurts, or added to the feed given to animals. Omega-3 eggs are a great example. Some of these eggs contain more DHA than ALA, while others supply more ALA, so be sure to read the labels.

A third type of omega-3 fats – ALA or alpha-linolenic acid – is also found in plant sources such as flaxseeds, chia seeds, walnuts, canola, hemp oil and leafy greens. While your body can convert ALA to the more potent DHA, it’s a very inefficient process. In other words, you would need to consume a lot of ALA to reap the rewards. Keep in mind, though, that studies show that a diet rich in plant omega-3s offers other benefits, such as anti-inflammatory action, plus a reduced risk of autoimmune disease and heart disease.

Adding fish to your diet is the easiest way to boost omega-3s, but there are barriers to getting kids to eat the recommended two servings of fish a week. For one, many kids turn their noses up at fish. Second, just do a quick Internet search on children and fish and you’ll probably see one warning after another about the contaminants found in fish.

Let’s clear up the murky waters about children and seafood. A major concern, particularly for pregnant and breastfeeding women and small children, is the mercury levels found in fish, in particular, large predatory fish. Fresh or frozen tuna, shark, swordfish, marlin, orange roughy and escolar along with canned white albacore tuna are among the offenders.

There is good news, though, for tuna lovers. White albacore tuna from British Columbia, both frozen and canned, is essentially mercury free and is a super way to meet omega-3 quotas. You can check online for where to purchase it. Salmon, whether farmed or wild, offers plenty of omega-3 fats without any mercury worries.

How to reel in your kids

Rosie Schwartz is a Toronto-based consulting dietitian in private practice and author of The Enlightened Eater’s Whole Foods Guide (Viking Canada). Visit at rosieschwartz.com for more.

What Parents With an Autistic Child Wish You Knew About Autism