Parenthood: An Unconventional Story Of Siblings, Surrogacy And Selflessness 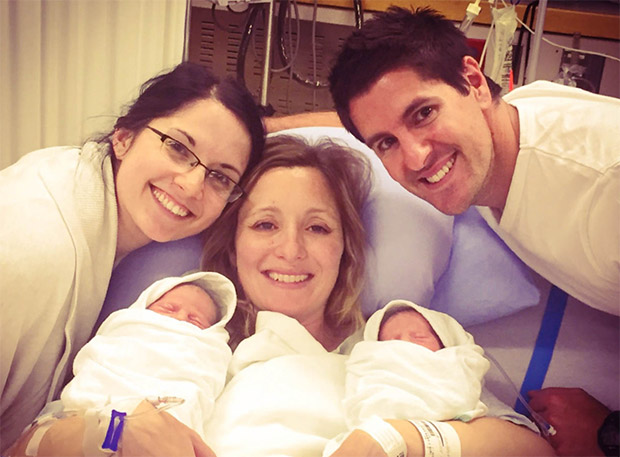 Their mothers were best friends in elementary school, but they lost touch. Years later, they reconnected at a school reunion. Both were pregnant and, from the beginning, it seemed that their children, Eric and Danielle, were meant to be together.

Fast forward to today. Eric and Danielle have been together for 13 years and have recently welcomed their first children, twin girls. The couple is overjoyed—especially when they remember the struggles they experienced along the way.

Seven years ago, Danielle was diagnosed with colon cancer. There were surgeries, complications, chemotherapy and radiation, happily resulting in complete remission. However, the couple was devastated when they learned that Danielle could not conceive or carry a child.

Then, unexpectedly, they received a gift of love. Natale, Eric’s older sister, told the couple, “I will be the person to make this happen for you guys.”

Medela sat down with the family to discuss their journey. Eric recalls the process: “We had a donor egg from the United States. It was fertilized and transferred, but it split, resulting in our having identical twins.”

Natale’s own three sons didn’t question what was going on. She says, “They felt like they were part of the process, and when we found out there were two, they asked if we could keep one!”

Eric recalls that after the birth, the days at the hospital were long. “We were there for 10 hours every day.” Danielle says, “We slept at the hospital for the first five nights. The girls were in the NICU and on a strict feeding schedule.”

Natale, being a physician herself, knew the benefits of breast milk, so she was pumping for the girls. Danielle recalls those early days: “Natale would come visit and bring breast milk or we would go visit her and pick up milk every day. Now it’s probably weekly when we get together, and she freezes the milk.”

When they brought the twins home, they got the girls on the same schedule to make life easier. In order to get the girls to feed successfully, Eric recalls having to try a few teats prior to settling on one that worked for them. “We went to the Medela Calma bottle and the feeding time got faster and there was less mess. it changed everything. Calma was a life changer for us.” Danielle agreed. “They just feed so well with these bottles.”

Hope and help for others

Parents in Ontario may be eligible for government funding for artificial insemination (AI), intra-uterine insemination (IUI), or in vitro fertilization (IVF) through Ontario’s new Fertility Program.

Surrogacy is legal in Canada, however, unlike the United States, Canadians are not legally allowed to pay a surrogate to carry a child. This form of unpaid surrogacy is called “altruistic surrogacy”, but altruism doesn’t seem to be a big enough word for the gift that Natale gave to her brother and sister-in-law.

“The twins are now approaching two years old,” says Eric. “Their smiles first thing in the morning, the wide-armed sprints to the front door, the excitement of achieving new milestones, and the love, pride and joy we feel every day are all thanks to a very special person—Natale.”

Brought to you by Medela