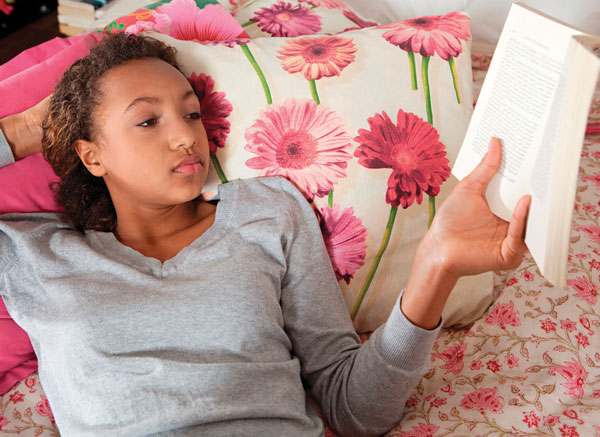 Harry Potter is too heavy. That was the opinion of Rochelle Hutton’s nine-year-old son Nolan when it was suggested that he start reading the series. Rochelle, an elementary school teacher in Waterloo, Ont., suspected that Nolan was not intimidated by J.K. Rowling’s story, but by the high page count and sheer thickness of each book. To ease the perceived burden, she downloaded the first few books to an e-reader.

“He embraced it right away because it was high-tech, and it meant that he didn’t have to hold or carry around a big, bulky book,” Rochelle says. “It also freed him from the worry of how many pages were still ahead of him.” Nolan quickly became hooked on the Harry Potter series and the movies, although Rochelle insisted he read each book before seeing its corresponding film.

This kind of outside-the-book thinking is effective in getting tweens engaged (or re-engaged) in reading. “To start with, follow their interests,” says Isabelle Hobbs, a teacher-librarian with the Durham District School Board in Brooklin, Ont. “If they like superheroes, suggest comic books or graphic novels. They may be drawn in by a humourous series like Captain Underpants. Perhaps they would prefer facts, such as the Guinness Book of World Records. If they have a limited attention span, try joke books or short stories.”

Another way to promote reader engagement is through the Ontario Library Association’s Forest of Reading initiative. There are four main age categories, all named after trees – “Silver Birch” titles are intended for ages eight to 12. Every year, 10 Canadian books are chosen for each of the three Silver Birch Award nomination lists: non-fiction, fiction, and express (specifically geared toward reluctant readers). Local and school libraries from across Canada can opt in and participate. Nominees are listed online and the books are tagged with a special sticker for easy identification on the shelves. The intent is for students to independently read as many nominated books as they can and cast a vote for their top choice. Some schools form reading clubs where students can gather to discuss the books.

“This year, we had almost 2,000 individual schools and libraries participating across Ontario,” says Isabelle, who is also the Forest of Reading co-chair. “Because students have a voice in deciding the winner, they become invested in their favourite books and authors.”

Isabelle advises parents of tweens to be open to a variety of genres as legitimate reading choices. “Books are great, but reading material comes in many forms,” she says. “Help them find something that appeals to them, whether it’s a traditional novel, a nonfiction guide, a graphic novel, a magazine or an article from an age-appropriate website.”

Despite his initial misgivings, Nolan finished the Harry Potter tales. Rochelle says he is happiest when he is working his way through a new book series. In her school library Isabelle has witnessed the same phenomenon. “A favourite series can be as comfortable as revisiting some old friends,” she says. “Give your child a chance to meet those friends.”