How to up your parenting game with Olympic-level mental skills 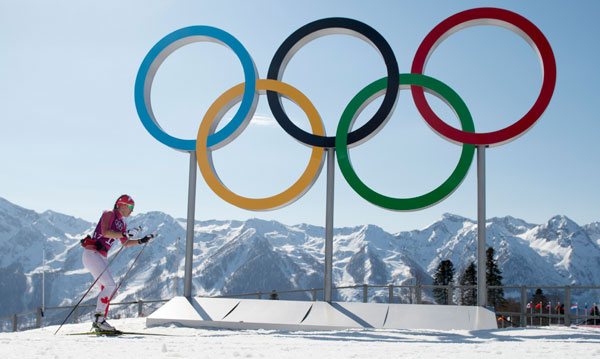 While there are no medals for great parenting, we have more in common with Olympic athletes than we may realize.

“Parents are people, just like athletes,” says Dr. Adrienne Leslie-Toogood, a licensed psychologist, adjunct faculty member at the University of Manitoba, and mother of two. As the Director of Sport Psychology for the Canadian Sport Centre Manitoba, Dr. Leslie-Toogood has worked with Olympians and Paralympians in various sports. In her view, there is a parallel between athletes and parents: “Athletes get stressed because they care about their performance. When we care and are emotionally engaged, the importance of things can be magnified. And, you’d be hard-pressed to find something people care about more than their children.”

Mike Wilson, a father of two from Guelph, Ont., works hard at keeping his cool and has had varying degrees of success. Once at a live sports event, he brushed off an incident with his son that might have caused a scene. “We were all hungry, and my son was returning to his seat with a piece of pizza. He wasn’t being careful and dropped the $9 slice facedown on to the concrete. He was so disappointed that I knew he didn’t need a preachy lecture from his dad at that moment. I brushed off the piece like nothing had happened and ate it myself, while we got him another one. He learned to carry everything with two hands after that.”

In contrast, Mike describes another situation where his son’s bad behaviour at hockey led to a dramatic consequence. “He was restless on the bench and kept smacking his stick against the boards,” Mike recalls. “At the end of the game, he said, ‘This stupid stick doesn’t work’ and threw it down the hallway. It was a long, silent car ride home. After we unpacked his equipment, I sternly informed him that the hockey stick was not at fault, and his conduct was completely unacceptable. I hadn’t planned to do this, but I picked up the stick and broke it over my knee, making sure that it would never be an excuse for him again. I felt bad about it afterwards, but his on-ice attitude has been flawless since then.”

Just as Olympic athletes need to have the mental toughness to shake off a mistake and the poise to perform in front of thousands of people, parents can apply similar psychological techniques in everyday situations to remain calm, cool and collected.

In moments of high stress, it’s important to take charge of your “self-talk,” also known as the voice in your head. “Our internal dialogue can make or break us in stressful situations,” says Susan Cockle, an Edmonton-based registered psychologist (and mother of two) who is accredited with the Canadian Sport Psychology Association. In her work with parents and Olympians alike, Cockle advises that “self-talk can either keep you in the effective zone or push you to the point where you may go over the edge into performing poorly or having your own meltdown.”

Rather than being your own worst critic, Cockle advises talking to yourself the way you would if you were encouraging a friend. “Keep your self-talk positive, helpful and focused in the moment,” she says. “Negative thoughts are only going to increase your heart rate and blood pressure, thus increasing your frustration level and making you feel less able to cope. In contrast, if you think, ‘It’s okay, I’ve got this’ or ‘I’ve managed this before, I can do this now,’ your body will remain more relaxed, your thoughts will be clearer and you will be able to act in a more rational way.”

Dr. Leslie-Toogood also advocates positive self-talk to her clients, and as a mother, she has experienced the need for it first-hand. “When my daughter was born, she did not sleep well, and it meant some really long nights,” she remembers. “Rather than stress about being tired the next day, I told myself to try and enjoy this unique stage. I took the time to look at her and appreciate the gift that I had. It was amazing how this created a different energy.”

To proactively prepare for upsetting situations, such as your toddler having a loud meltdown in the mall, Cockle suggests visualization. “Just as Olympic athletes are trained to overcome potential obstacles in their minds and come up with alternate strategies to succeed, parents can visualize calmly and effectively managing their child’s public tantrums. Once you have imagined how you would like to react and behave, you are more likely to be able to confidently follow through when you need to.”

While the emotional ups and downs of life with a toddler can make it an exhausting phase, Cockle reminds parents that it is just that – a phase. “Children’s needs and behaviours come in ages and stages, and they are continually changing,” she says. “If we forget to keep perspective, our parental anxiety will increase, leading us to blow things out of proportion and expect negative outcomes. Seeing the bigger picture allows parents to remain optimistic and believe that their children will be successful in time.”

The daily rush to get everyone dressed and out the door on time can set off short fuses and create conflict. In an effort to remain calm, Cockle recommends asking yourself the question: “What is the goal here?” Once you’ve got a clear purpose, re-focus your energy on completing that task. “Since the parent has the more fully developed, mature brain, he or she must lead the way for the child,” Cockle says. Rationally, this makes perfect sense, and we all know that the best way to teach our children to manage their emotions is to demonstrate it ourselves. Still, in the moment, it can be hard to do. The simplest solution? Get some air.

“A few well-timed deep breaths can help defuse any situation,” Cockle explains. “When we put more oxygen in our system, it allows us to think more clearly and keeps our muscles relaxed. We then feel more confident, capable and in control.” She suggests the simple breathing pattern of exhaling fully, inhaling slowly for three seconds, and repeating. “Invite your child to pause and do this with you,” she advises. “You will be teaching him a valuable tool to help regulate his own emotions.”

In today’s high-tech world, it takes mental discipline (willpower, even) to disengage from the ever-present screens in our lives. “Constant use of technology can increase our stress levels by increasing the demands on our time, diluting our focus and interfering with our ability to connect in our face-to-face relationships,” says Cockle.

In addition to the technological distractions in the moment, parents’ mental batteries may become drained from the cumulative effect of constant connectivity. “Under-recovery and overtraining can lead to a heightened emotional state, and parents are often working too hard and too long,” says Dr. Leslie-Toogood.

How do we wrestle the devices out of our own hands and coach ourselves to be fully present? “Parents can model healthy use of technology by setting visible limits for themselves and having technology-free time in order to devote their full attention to others,” says Cockle.

In parenting, there is no podium. We’re not trying to be faster, higher or stronger than other moms and dads. If anything, we need to do the opposite and refrain from judging each other. We all have moments where we run out of patience, so we should be grateful that no one is measuring us against parents from all over the world. “It’s important to understand your own vulnerabilities,” says Dr. Leslie-Toogood. “We are all human, and we are all imperfect. If you tend to blow up in certain situations, that is okay. Learn how to manage it, especially if it is getting in the way of being the parent you want to be.” If we can do that, we’re as good as gold.

Kristi York is a freelance writer and mom of two who would watch Olympic TV coverage around the clock if she could.