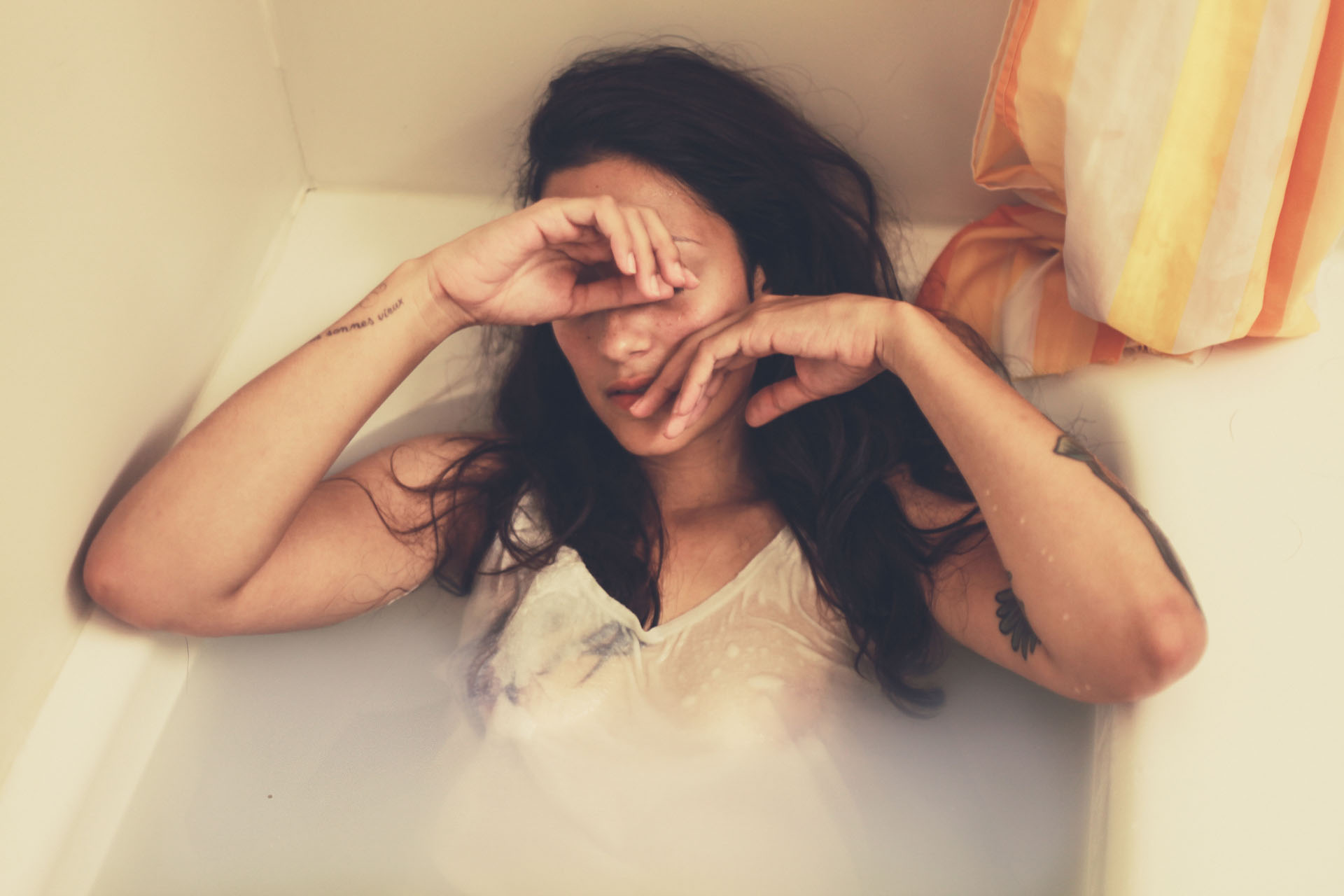 Breaking the cycle of shame associated with postpartum depression

Anna Katz’ pregnancy was blissfully uneventful; “I loved being pregnant; it was the best thing in the whole world. I felt fantastic,” recalls Anna.

But right after her daughter Skye was born, Anna was totally blindsided by overwhelming anxiety, fear and doubt.

“Every time I would see her or try to feed her, I’d start panicking and feel nauseous; I could barely breathe,” says Anna. “They actually kept me in the hospital an extra day because they didn’t feel good about sending me home with her. That last night in the hospital, they put Skye in the nursery so I could get a decent night’s sleep, but I couldn’t sleep. My whole body was shaking inside.”

Once at home, Anna’s anxiety worsened. Over the next three weeks, she couldn’t sleep, eat or function properly.

“If I heard her crying, I’d start crying, shaking and sweating,” says Anna. “I kept thinking, ‘I never should’ve done this. Why did I have a kid?’ I absolutely adored her, but I remember lying in my bed with her, rocking her and crying, saying, ‘I’m so sorry, I’m so sorry.’ The guilt was excruciating.”

Then Anna started having disturbing thoughts. “A couple of times, part of me wished I could just jump off my balcony and die. Never horrible feelings or thoughts about my daughter, just ‘If I wasn’t around, it would be better for her’.”

Anna’s husband, Scott, became worried enough to take her to the emergency room. “They put me in a room with a psychiatrist, who told me, ‘It’s postpartum depression (PPD), and you’re going to get over it,’” she recalls. “They gave me medication, and I literally slept for 48 hours. Then things started to get better. Each day, I would get up and say, ‘OK, it’s not so bad’.”

New mothers in Quebec receive regular visits from a public health nurse, which further eased Anna’s mind. “She came over almost every day, and I’d tell her, ‘I’m a bad mother. I don’t know what I’m doing; she’s going to hate me’, and the nurse would say, ‘Anna, don’t worry! You’re going to make mistakes, but Skye’s not going to remember them.’ She really helped me by explaining that a lot of women go through this, that I wasn’t the only one.”

“Up to one in five mothers will experience some form of depression or anxiety while they are pregnant or up to a year after delivery; it’s one of the biggest complications of childbearing,” says psychiatrist Dr. Jasmine Gandhi, who specializes in helping pregnant women and new mothers overcome mental health issues at The Ottawa Hospital’s (TOH) Maternal Wellness Clinic, which treats 500 women each year. “TOH has about 8,000 deliveries a year. If we were doing universal screening of women through public health nurses and at the six-week postpartum visit, which is something we’re working towards, we’d probably see at least another 500 to 1,000 more women who need help,” reports Dr. Gandhi, noting that feelings of inadequacy, fear, self-doubt, or worse—ambivalence and dislike for your child—are pretty common.

Yet despite major political and public interest in PPD, many women are still reluctant to seek help for this very treatable problem. “It comes back to the shame of it all: Nobody wants to admit that they’ve got depression or anxiety,” says Dr. Gandhi. “Compound that with a time in your life when you’re supposed to feel happy and blessed, but your biology is just not cooperating. I think the biggest thing is the guilt; motherhood is something you’re supposed to love and be very grateful for, but in fact that’s not how you’re experiencing it. It can be a really miserable time if you suffer from depression, not to mention general sleep deprivation, the internal, psychological transition for you in becoming a parent. Women need to recognize that if it’s not going the way you thought, don’t beat yourself up. If you had breast cancer, you wouldn’t do that; you’d seek help.”

Another reason women don’t come forward, adds Dr. Gandhi, is because they don’t think of depression as a medical illness, because the main symptoms are emotional and psychological. “In fact, if we wanted to, we could do lab tests that show that your platelet serotonin levels are low, or a functional MRI to show that your brain is not functioning (properly), but we don’t do that because it’s invasive, painful and expensive,” she says, adding that a diagnosis can be made through taking a history. “PPD is a traumatic experience, but because of the stigma and the lack of hard, physical evidence, women tend to believe that somehow their depression is under their control. It’s also a symptom of depression to feel guilt and self-doubt. So put those two together and women see that as a shortcoming about themselves.”

From bad to worse

Sometimes, when women and their families ignore worsening signs of PPD, the condition can lead to postpartum psychosis, says Dr. Gandhi.

“If you have feelings of not wanting to live, or are hearing voices, feeling paranoid, having thoughts of harming your child, that’s a medical emergency. Seek treatment right away, whether it’s with a family doctor, a walk-in clinic, a 24-7 crisis line or going to the emergency room,” says Dr. Gandhi.

Mothers like Anna Katz who seek help early usually have great outcomes, says Dr. Gandhi. Treatment can include medication that’s safe to use while breastfeeding, or various kinds of talk therapy.

Even reaching out to someone who isn’t a trained professional can have a huge impact. Recent research has shown that mom-to-mom peer support can drastically reduce a woman’s risk of tumbling into PPD. Dr. Cindy-Lee Dennis, Canada Research Chair in Perinatal Community Health at the University of Toronto and at Women’s College Resarch Institute, studied 701 new mothers, and published her findings in the British Medical Journal.
“My province-wide, randomized controlled trial clearly showed that mothers who receive telephone-based support from another mother who previously experienced postpartum depression and recovered were at half the risk to develop postpartum depression in the first 12 weeks postpartum,” says Dr. Dennis.

It takes a village

Creating and building a community of support for new parents, which includes public health nurses, mom groups, friends and family, is crucial, says Dr. Gandhi. “This is something that existed 100 years ago, when we had neighbours, grandparents and aunts to help us through all of life, not just childbirth. Women don’t necessarily have that nowadays; having a baby can be an isolating experience.”

There are many support groups, help lines and postpartum programs across the country where new mothers can turn (see left), but Dr. Gandhi says “there are not enough.”

Today, Skye, six, is happy and healthy. And so is her mother, Anna. “If you feel something’s not right, go talk to your doctor right away,” says Anna. “If you have PPD, it can get better on its own, but a lot of the time, it’s not going to. So treat it. There’s no shame at all, and your kid’s not going to remember a thing.”

Wendy Helfenbaum is a Montreal writer and television producer, and frequent contributor to ParentsCanada. Originally published in 2011.

Do I need a routine for my baby?

Why Swaddling Newborns Is No Longer Recommended